Distractions are all around us, and you’re probably carrying around one of life’s biggest distractions right now (if you aren’t reading this article on it). However, technology isn’t the only thing vying for our attention these days.

In addition to getting in the way of your productivity, these interruptions can be a massive drain on your time. And while a lack of sleep could be contributing to your diversion, distractions lead you to procrastinate on tasks and could also be part of what keeps you up at night.

So, what catches our attention when we’re ready to drift off, and how do we manage the tasks that come to mind at the worst possible time? To find out, we surveyed over 1,000 people about the things they procrastinate on, what distracts them, and how those interruptions impact their sleep habits. Here’s what they had to say.

To some extent, we’re all guilty of procrastinating from time to time. In the past three months, more than 4 in 5 respondents admitted to putting off a task and having to complete it at the last minute. Seventy-seven percent of women and nearly 74 percent of men remembered to complete a task while they were getting ready for bed.

In most cases, people opted to stay up late to take care of the tasks they’d forgotten to complete during the day (47 percent), while 23 percent decided to get up early instead. Nearly 1 in 3 people acknowledged doing both depending on the task.

Procrastination isn’t always intentional. More than half of people who admitted to procrastinating acknowledged they simply forgot the task at hand. In contrast, nearly 49 percent identified a lack of motivation, followed by about 47 percent who got distracted and 41 percent who were too tired.

Forty-one percent of people procrastinating had woken up panicked in the middle of the night when remembering to complete a task.

And more than 2 in 3 people drew the connection between procrastination and feeling well-rested, indicating they got less sleep than usual when they put off chores or tasks that needed to be taken care of.

Poor sleep can make you more likely to be distracted during the day. Nearly 2 in 3 people acknowledged they were more likely to procrastinate when they didn’t get enough sleep the night before. In fact, over 3 in 4 people who identified as procrastinators admitted to not getting the recommended seven or more hours of sleep each night. 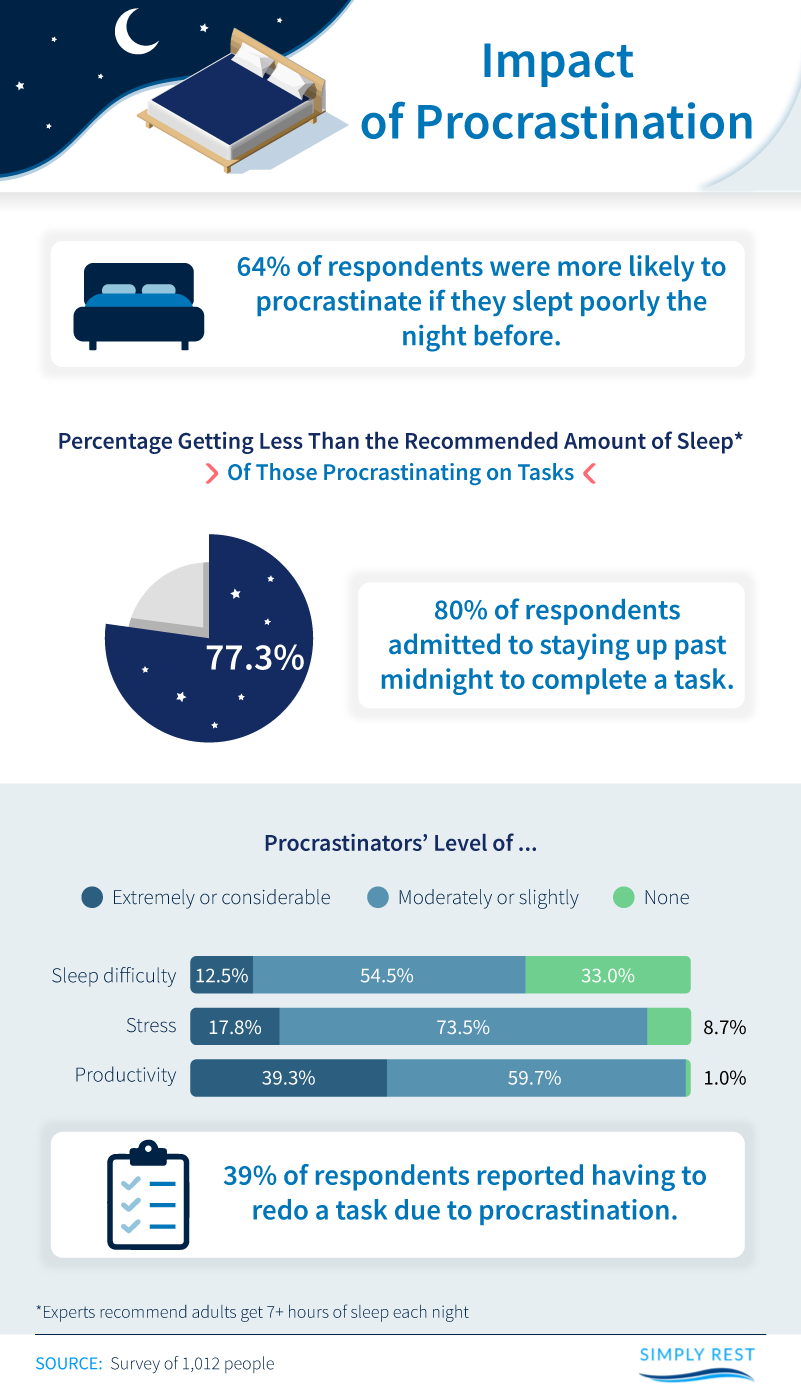 So, what happens when you realize there’s something you forgot to do during the day? Four in 5 respondents confirmed staying up past midnight to complete a task. Nearly 2 in 5 also acknowledged having to redo a task they procrastinated on, indicating the quality of their work is affected when working on a task at the last minute. Fifty-five percent found it moderately or somewhat difficult to fall asleep, almost 18 percent were extremely or very stressed, and more than half considered themselves moderately or somewhat productive as a result of their procrastination.

In the Hunt for Sleep

You may wonder whether getting distracted is more likely to keep you from getting a good night’s sleep, or if not getting a good night’s sleep is what’s making you so distracted. As we found, most people are guilty of procrastinating, and people who are already prone to poor sleep are more likely to put off tasks because they’re tired, disinterested, or have time management issues. However, nearly 2 in 3 respondents recognized they’re more likely to put things off when they don’t get proper rest.

When asked about the findings of this survey, Simply Rest staff writer Erin Rossi had this to say, “If you don’t get enough sleep at night, you’re liable to be distracted throughout the day. If you’re distracted during the day, you’re just as likely not to get the recommended amount of sleep or have high-quality rest. It’s a vicious cycle, and breaking this habit can be difficult if you don’t know where to start.”

At Simply Rest, we know how important every second of sleep is to the rest of your day. We specialize in sleep health, expert research, and mattress guides to help you maximize every moment of rest with science-backed tips and recommendations. If you’re not getting the sleep you need, our sleep health experts have the resources to make a change. Visit us at SimplyRest.com to learn more.

For this project, we surveyed 1,012 people. Respondents had to be employed to qualify. Respondents had to answer questions about what important tasks they forgot to work on during the day or left until the last minute and how it impacted their sleep and productivity throughout the day.

Respondents ranged in age from 23 to 62 with an average age of 38 and a standard deviation of 10. Forty-six percent of respondents identified as men, and 53 percent identified as women.

For short, open-ended questions, outliers were removed. To ensure that all respondents took our survey seriously, they were required to identify and correctly answer an attention-check question.

These data rely on self-reporting by the respondents and are only exploratory. Issues with self-reported responses include, but aren’t limited to, exaggeration, selective memory, telescoping, attribution, and bias. All values are based on estimation.

You don’t want to sleep on these results, and you don’t want to put off sharing them with your readers either. Help them learn more about maximizing their sleep health for any noncommercial use by including a link back to this page in your report.

This article is for informational purposes and should not replace advice from your doctor or other medical professional.